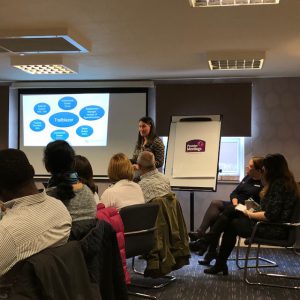 Degree level Apprenticeships are a Government Initiative to combine on the job training with a Degree that meets the apprenticeship standard as required for professional registration and Professional Body recognition.  Apprenticeship tuition is funded from the Apprenticeship Levy; however Employers will need to fund salaries for their Apprentices.  This is a long term initiative for Employers to take control of the future recruitment and retention of their workforce; recruiting Apprentices from the local area who they feel have the aptitude to become successful, caring Diagnostic Radiographers.

Progress on the development of a Degree Apprenticeship standard for Diagnostic Radiographers has been intense in the last 3 months.  This will be a standard which Higher Education Institutes will need to meet, to create degree apprenticeship courses for England.

A stakeholder event, launching the Diagnostic Radiographer Trailblazer took place on 25th January 2018.  This event was well attended by 27 employers from across England, including NHS and private providers, as well as 9 Higher Education Institutes (HEIs), the Health and Care Professions Council (HCPC), Health Education England (HEE), The College of Radiographers and Skills for Health (SfH).  Information about Apprenticeship standards and Trailblazer groups as well as key HCPC considerations was shared by Key stakeholders to ensure everyone understood what was expected.  The afternoon session provided an opportunity for brainstorming on ‘duties’ or tasks the qualified apprentice Diagnostic Radiographers will need to be able to do.  There was some lively discussion about ensuring these apprentices will be fit for our future workforce needs and whether tasks such as IV cannulation should be included.

This wider event culminated in Employers and HEIs signing up their commitment to participating in the Trailblazer process, illustrating the intention to recruit and support Diagnostic Radiographer apprentices in the future.  This has led to a Trailblazer group being formed of 16 Employers and 4 HEIs from across England (Employers involved are listed on the Skills for Health HASO website).

The purpose of the Trailblazer group is to:

The ‘duties’ that were captured in the wider stakeholder event were collated into a distinct list by the Trailblazer Chair with some facilitation from Skills for Health, so that when the identified Trailblazer group met for its first meeting on 28th February 2018 these were reviewed and discussed in detail  to form agreement.  The identification of associated Knowledge, Skills and Behaviours for each duty or task was then completed.  The final product of the list of duties, with described knowledge, skills and behaviours is the degree apprenticeship standard.  The group have so far been really successful in working together both efficiently and effectively, with much enthusiasm and experience contributing to the discussions.

A maximum of 20 duties are expected with associated Knowledge, Skills and Behaviours for submission, so those drafted have been streamlined for commonalities into a more succinct list and inputted into the IfA’s draft standard template.  The Trailblazer team members met to review and agree the draft standard on 28th March 2018, in preparation for a wider online consultation to be launched at the beginning of May 2018.  This consultation will be an opportunity for all Diagnostic Radiographers, Employers and other interested parties such as potential Apprentices of the future, to comment on the draft standard before it’s eventually submitted to the Institute of Apprentices for approval.

A subset of the Trailblazer group has also been identified to start work on producing the End Point Assessment (EPA).  This EPA assessment is a requirement of the apprenticeship and must be passed by each Apprentice at the end of their training to verify they have the Knowledge, Skills and Behaviours to meet the requirements of the duties described in the Standard.  This assessment must be undertaken by someone who has not been involved in the education and training of the apprentice.  The EPA Subgroup also met and began the EPA design process at the March meeting, where the broad terms of the 2 forms of clinical assessment to test underpinning knowledge as required by the IfA were agreed to be the form of an OSCE and professional discussion based on the clinical portfolio.

The Institute for Apprenticeships have placed a condition that the Diagnostic Radiographer and Therapeutic Radiographer standards are submitted together.  It is therefore an important part of the standard and EPA design process that there is regular communication between the two trailblazer Chair’s to ensure the Diagnostic Radiographer and Therapeutic Radiographer standards are separate and distinct and show their separate professional identities. Whilst the timeline has not yet been confirmed, we are currently working towards a submission in September 2018, to enable discussions between employers and education providers, the HCPC and CoR to take place for programmes to be ready for recruitment for a September 2019 start.

Please look out for further updates from the Diagnostic Radiographer Trailblazer as well as the opportunity to consult on the draft standard in May 2018.

If you are interested in reading more about apprenticeships; information can be found on the following websites:

We are using cookies to give you the best experience on our website. You can find out more about which cookies we are using or switch them off in settings.

This website uses cookies so that we can provide you with the best user experience possible. Cookie information is stored in your browser and performs functions such as recognising you when you return to our website and helping our team to understand which sections of the website you find most interesting and useful.

Strictly Necessary Cookie should be enabled at all times so that we can save your preferences for cookie settings.

If you disable this cookie, we will not be able to save your preferences. This means that every time you visit this website you will need to enable or disable cookies again.

This website uses Google Analytics to collect anonymous information such as the number of visitors to the site, and the most popular pages.

Please enable Strictly Necessary Cookies first so that we can save your preferences!